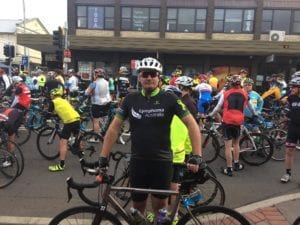 Stephen at the Bowral Classic 2017

Stephen is one of our many DVA clients that we feel privileged to work with. Stephen first came to us with neck and shoulder issues from his time in the Defence Force. After being diagnosed with Lymphoma in 2010 and spending the next few years on and off in (his own words) “chemo hell”, he got lucky and they found a matching anonymous bone marrow donor.

Recovering, but in pain, Stephen was referred to Transcend Health on a DVA D904 referral from his GP.

Affectionately nicknamed “Trouble”, We asked Stephen what he enjoys about Transcend Health and what has kept him coming back.

“I feel better afterwards. No Pain. No Headaches and I feel stronger.”

Suffering from migraines due to his injuries, Stephen would often be forced to take sick days from work. Since coming to Transcend Health, he hasn’t had to take a single sick day.

A regular with both Caity and Jacci, Stephen has had first-hand experience of what happens when having Physiotherapy and Exercise Physiology concurrently.

What’s the biggest benefit you’ve had since coming to Transcend?

“I don’t hurt for days after doing the things I do for fun – like cycling, water skiing, and squash.”

Who do you prefer – Jacci or Caity?

“That’s not fair! That’s like comparing sisters! You both have our unique way of hurting me!”

Any advice for anyone who is thinking of coming to Transcend Health?

Do It! Have a clear idea of what you want out of it because they deliver!

Stephen also completed the 2017 Bowral Classic, raising funds for Lymphoma. He completed this 120km bike ride on Oct 22nd supporting a cause very close to home.

“Now I’m well enough, I’m doing what I can to support Lymphoma Australia because this is the only way I have to fight back against the disease that tried to kill me.”